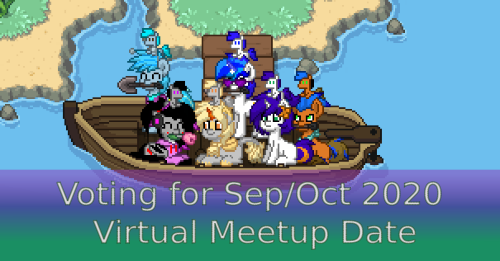 It’s time to pick the date for the next Virtual Trottinghamshire Meetup. This poll will close on the 6th of September at Midnight. Like last time around there is also the optional question to pick dates that you don’t want to have the meetup on, to be used in case of a tie break between days.

Our August Meetup this month had about 7 people on the call. Most of the meetup was spent re-watching the first two and a half seasons of RWBY, and the rest of the time was spent catching up with other members of the group. On a related note, if there are any shows that people want to watch together at the next virtual meetup, feel free to make a suggestion on the Facebook group or Trottinghamshire Bronies Discord Group.

While the pubs have technically opened, I still do not think it is safe or feasible to have a meetup in real life yet. Because of this the plan for the next meetup is to run another Virtual Meetup by having an audio call going on in our Trottinghamshire Bronies Discord Server, between 12:30 pm and 5:30 pm (-ish), and keep the overall schedule as light as possible. This way people can decide what they want to do on the day.