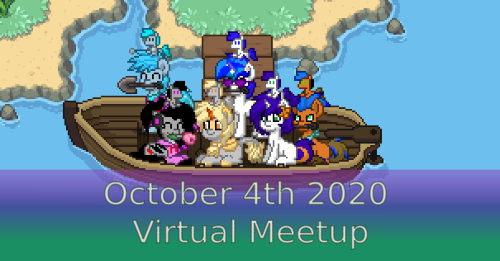 The voting for the next Trottinghamshire Meetup is now closed and the date picked for the next virtual meetup is 4th of October. This date
was picked due to it being the most popular day, the least disliked day, and the day that gives people the most notice.

Our August Meetup this month had about 7 people on the call. Most of the meetup was spent re-watching the first two and a half seasons of RWBY, and the rest of the time was spent catching up with other members of the group.

On a related note, if there are any shows that people want to watch together at the next virtual meetup, feel free to make a suggestion on the Facebook group or Trottinghamshire Bronies Discord Group.

The plan for the next meetup is to run another Virtual Meetup in October by having an audio call in our Trottinghamshire Bronies Discord Server, between 12:30 pm and 5:30 pm (-ish), and keep the
overall schedule as light as possible. This way people can decide what they want to do on the day.

So we can run the Virtual Meetup, Audio Channels have now been added to in the Trottinghamshire Bronies Discord Server to help coordinate playing games online and socialising
(Canterlot🔈, Ponyville🔈,Cloudsdale🔈, and Trottingham🔈).